Sleep is a daily activity in which there is an alteration of our state of consciousness, where we no longer perceive the world that is around us and a series of processes, which are essential to our health, are activated.

Contrary to our belief, sleep is a process in which our body and brain remain active passing through several stages.

Brain waves change significantly when we sleep, and it is during the NREM NREM (No Rapid Eye Movement) stage, in which we spend 80% of the time that we sleep, where the cycles alternate.

When we are resting, we go through several stages that occur in a repeated pattern throughout four or six cycles during the night.

Stage I:In this stage sleep is light, we still perceive the stimulation from our surroundings and we can wake up easily. During this stage, sleep is not restful and the muscle tone starts to reduce. This stage represents 5% of the total time of sleep.

Stage II: The heart rate and breathing rate drop. The muscles relax, leading to unconsciousness, and the sensory perception and exterior information are blocked, which assists the sleeping behaviour. Sleep is partially restful and the muscle tone is reduced even more. This stage approximately represents 50% of the total time of sleep.

Stage III: : This stage is important in terms of rest, as the sensory perception is blocked even more and sleep is deeper. If we would be woken up in this stage, we would feel disoriented and confused.. Stages 3 and 4 are similar. They are called slow wave sleep due to the amplitude of the waves in a polysomnography, which is how sleep is analysed. The difference between stages 3 and 4.

Stage IV: : Stage 4 is the stage in which sleep is deepest and most restful. During this resting period, the muscle tone is much lower than in other stages; therefore, it is when the organism's physical and mental systems are restored. Slight dreaminess is common, with images, lights or vague figures, but never story-based. This stage is important because it is when we produce the growth hormone, which is essential for the complete development of children and athletes, as well as to repair tissue. This stage represents 5% of the total time of sleep. 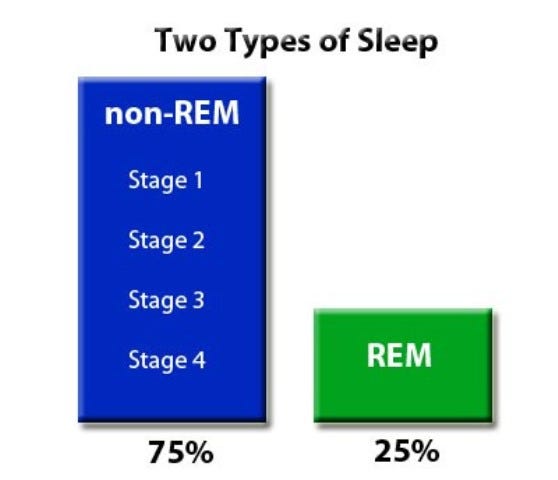 DIFFERENCES BETWEEN THE NREM AND REM STAGE

The main difference between these two stages is the occurrence of rapid eye movement, which occurs in the REM stage. A typical night of sleep can be 75% NREM sleep and 25% REM sleep.

The NREM stage usually appears before the REM stage, which is noted for progressive deepening of sleep , and it occurs in four stages (I-IV). All the stages are usually repeated during the night. If we take a range of 7 to 8 hours of sleep, this cycle will be repeated between 4 and 6 times, with an average duration of 90 minutes.

NREM sleep is usually concentrated in the first part of sleep, while the stage of REM sleep, which is when there is intensive brain activity, occurs at the end of that stage, representing 20% of an adult's sleep.

Differences between REM and NREM sleep

At Pikolin, we are aware of the many tasks that our organism carries out while we rest. In addition to the brain activity, “maintenance tasks” are carried out that complement the total reparation of our body, so we can wake up in perfect form and face the new day ahead in the best physical and mental state. 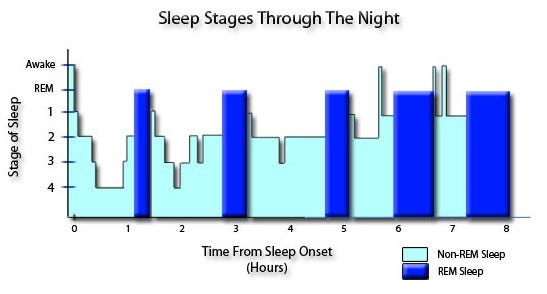